Have you been over to my new blog home yet? I've been writing about blog guilt, character development, the launch of my new business, and other crazy wonderful things. I'm just setting out a fresh plate of e-shortbread ~ hope to see you there!

After much deliberation, I've decided to set up e-house elsewhere. I hope you'll follow me over to my new 'net home, Something Delicious. Livejournal gave me six good years but it's just not what I want or need any more. My blogging, as you know, has been sporadic, and I've made a fresh commitment to it. It seemed only fitting to start fresh in every respect.

Will you come with me? I have cranberry orange scones ... and cake! (And the cake is not a lie.)

What is not decidely not summer fun: wearing a halter top, forgetting sunscreen, and feeling your burned skin crackle whenever you stretch your arms over your head the next day.

What is decidely summer fun: making soup on those nights that are just chilly enough to make you wish for a blanket.

I'm still expanding my kitchen repertoire, and more often than not I reach for a cookbook - I love trying new recipes, and it's rare that I don't come away with something mildly-to-extremely delicious, thanks to a couple of go-to books that have yet to disappoint me. But one recipe existing solely in my mind that turns out well, and just a little different, every single time is this:

1. Saute the onion, carrot and celery in olive oil with the curry powder over medium heat until carrot has softened and onion is translucent
2. Add garlic and saute until golden, NOT brown
3. Add chicken broth and orange juice to pot until veggies are covered generously and you have enough liquid to cook a bunch of noodles without crowding ~ I like mostly broth with a generous splash of OJ; you can add a splash of white wine here, too, if you have any
4. Take a look at your chicken pieces and add an amount to the soup that feels satisfying for three servings; this will vary depending on your mood, some nights you will want more meat than noodles
5. Add a bit of Worcestershire sauce and bring soup to a simmer; cook until the veggies have softened to your liking
6. Add noodles (between 1/2 cup and 1 cup, again depending on your fancy) and simmer until al dente

You can add seasoning at this point, but if your broth is flavourful enough (homemade is the best!) you shouldn't need it. Sometimes I scrape a bit of parmesan on top, or add a sprig of parsley. Whatever you do, I think you'll find this "recipe" takes very well to tweaking! I have never made it the same way twice, and it always finds a way to please me. 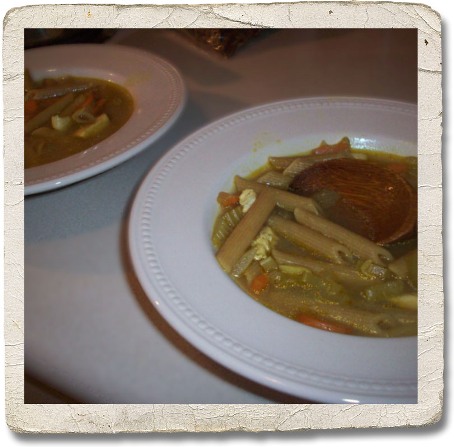 The Michelin Man made a visit to my coffee cup ~ and mmmm, was he ever delicious ... 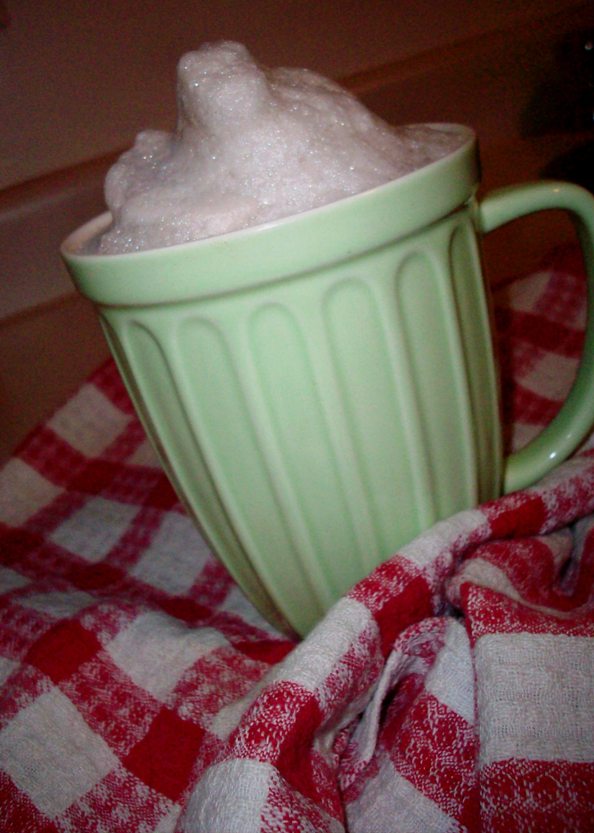 I think the definition inherent to a bucket list is coming up with things you want to do before you "kick the bucket," and I respect that. So maybe creating a Summer Bucket List doesn't seem that smart on the surface. Kind of like it's inviting trouble. But to me, it's more like things I want to do before summer kicks the bucket. Still, I think some would hesitate to turn it into something that looks like just another to-do list, but you know what? To-do lists are how I get my kicks. I love making them, using them, looking back at them ... and more often than not, they help me remember exactly what it is that makes me happy, what it is that makes me satisfied.

So, that being said! My Summer Bucket List: Knitting and Crocheting. This summer, my fibre adventures will include:

- participating in Ravelympics on behalf of Team TARDIS ~ we are in an unofficial-but-oh-so-fabulous contest with Team Sherlocked, to see who can make the most British-themed items, so it's the perfect excuse to whip all my Doctor Who projects out of my Ravelry queue and toss them into the ring!
- learning more about colourwork ~ this, too, stems from Ravelympics, as one of the projects on my list is a pair of Doctor Who mittens with colourwork galore to create different silhouettes of Daleks, K9s and TARDISes, oh my!
- getting, and staying, on top of my WIPs so I don't have a constant backlog when I want to make something new for myself or someone awesome
- picking a pattern for my first sweater, finding the wool, and getting it going, once and for all

How about you? Any knitting or crocheting related tasks on your Summer Bucket List?

My head knows that "series" is already plural, but whenever I talk about multiple series I always want to add something to the word: serieses! Or something.

Anyways, I mentioned the other day that I wanted to make a Summer Bucket List. In the interests of being accountable, and also just because it's nice to have a place to share and keep track of these things [in spite of all the silly LJ spam, ugh], I've decided to share bits and pieces of it here. I'm still pulling the list together, but one thing that's for sure is this: this is definitely a summer for catching up on serieses!

These are the series books that I want to start/continue/finish this summer:

*runs out door to skip in sunshine and start reading*

*not at the same time*

So it took a few more days than I thought it would before I could get to the sewing - partly because I had a meltdown with the sewing machine, which I later discovered was due to me not threading it properly. Once the MumPilot helped me and the machine sort out our differences, we were off to the races! I hemmed a halter top I'd grabbed for free from the lobby, and took about eight or ten inches off a blue-and-white polka-dot-hearts skirt, so it just skims my knees.

I still have a bucketful of sewing projects languishing under my bed, but now that I have made friends with the sewing machine again, I think it'll be much easier to charge through those projects. More skirts to hem! More summer outfits to pull together! And it sounds like it's going to be a warm one, so I'm just in time ... yays!

I'm pondering making a summer bucket list - less of a list where I have to do EVERYTHING or else I will feel SO GUILTY, more of a list that reminds me on one of those hazy summer days when I have time off work, "Oh, hey, that's a cool idea!" Anyone up for making one with me?

ETA: just finished hemming and taking in the waist of a crinkly black skirt with a floral pattern - perfect summer length!

What I really want to be doing right now?

Setting up the sewing machine, piling the plethora of to-be-altered-or-mended clothes next to me and going to town whipping up a new/old wardrobe.

What I am doing?

Such is life. Le sigh.

But, says the optimist in me, the sooner work is done the sooner the sewing machine comes out of hibernation! Onwards! "What words of support + encouragement can you share with other writers?

I'd say just one thing: remember that writing isn't worth anything without a life behind it. Life itself is the secret: the earthy passion & riotous dancing, the wines tasted, the trace of smoky perfume, the lingering glances & the dreams of what may be. That's where the real writing happens. It's in the center of a life lived full out, loving it all. Loving the people & animals & trees & rain & sunshine & and then putting it down in a way that you & everyone else never forgets. I wish you all good things in the living that is yours (& it's all good things ...)"

How many connections can you make between these cookies and various awesome books/TV shows/movies/games/etc? Not all options may apply.

(You may want to click the pictures to make them bigger.)